Amnesty International York celebrated Human Rights day on December 10th by sending good wishes to a number of people overseas who have been wrongfully imprisoned. 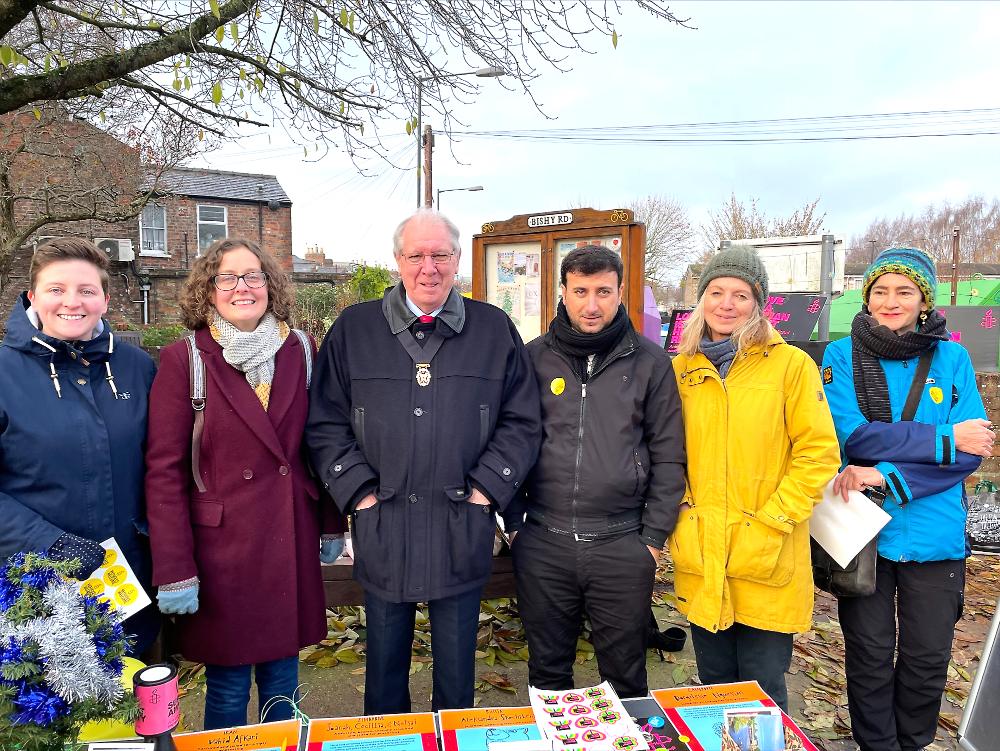 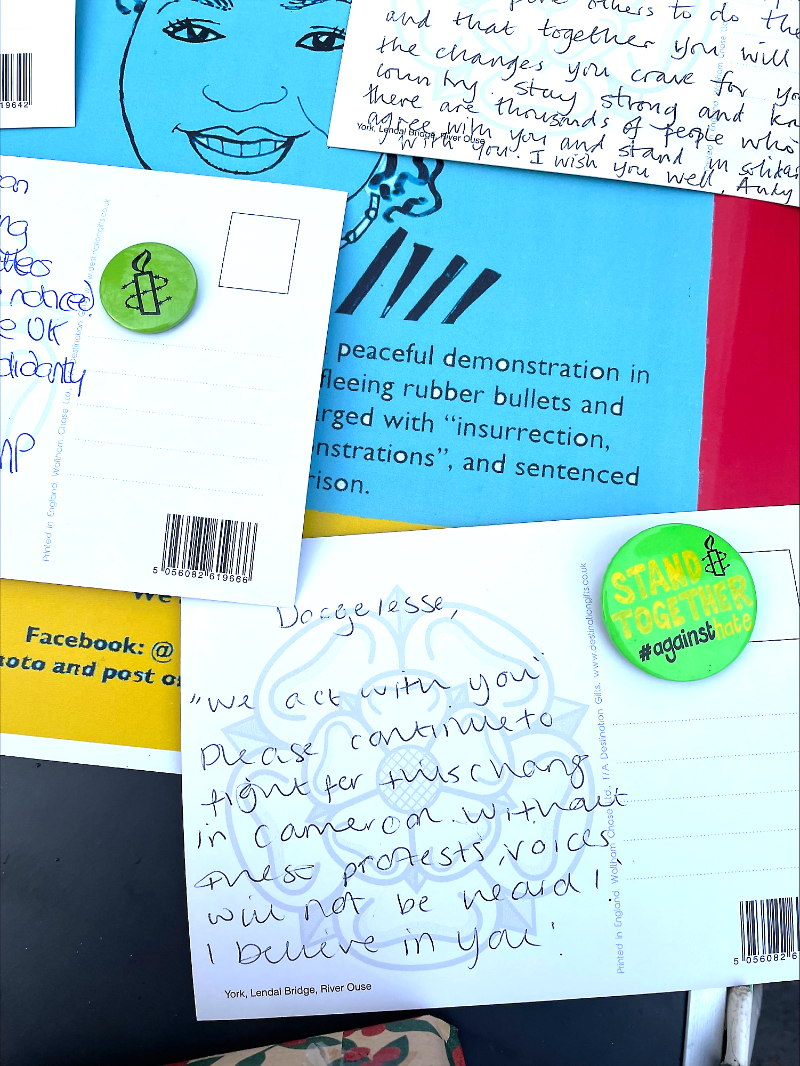 These include: Aleksandra Skochilenko from Russia - who openly opposed the invasion of Ukraine, Joanah Mamombe, Cecillia Chimbiri and Netsai Marova from Zimbabwe - who campaigned for women's rights, Dorgelesse Nguessan from Cameroon and Vahid Afkari from Iran - both of whom did no more than protest against the policies of their governments.

We were supported in this by local shoppers, who helped us write, and send, many messages of solidarity to these six, courageous people. We were also delighted to welcome the support of Rachel Maskell MP and the Lord Mayor of York, Cllr David Carr. This celebration was part of Amnesty's "Write for Rights" campaign, which has been running for over 20 years. It has transformed the lives of many people whose basic human rights have been destroyed. For more information about this campaign, you will be warmly welcomed at the Amnesty book shop (in Micklegate) any day of the week. Equally, you can look online here: https://www.amnesty.org/en/get-involved/write-for-rights/ 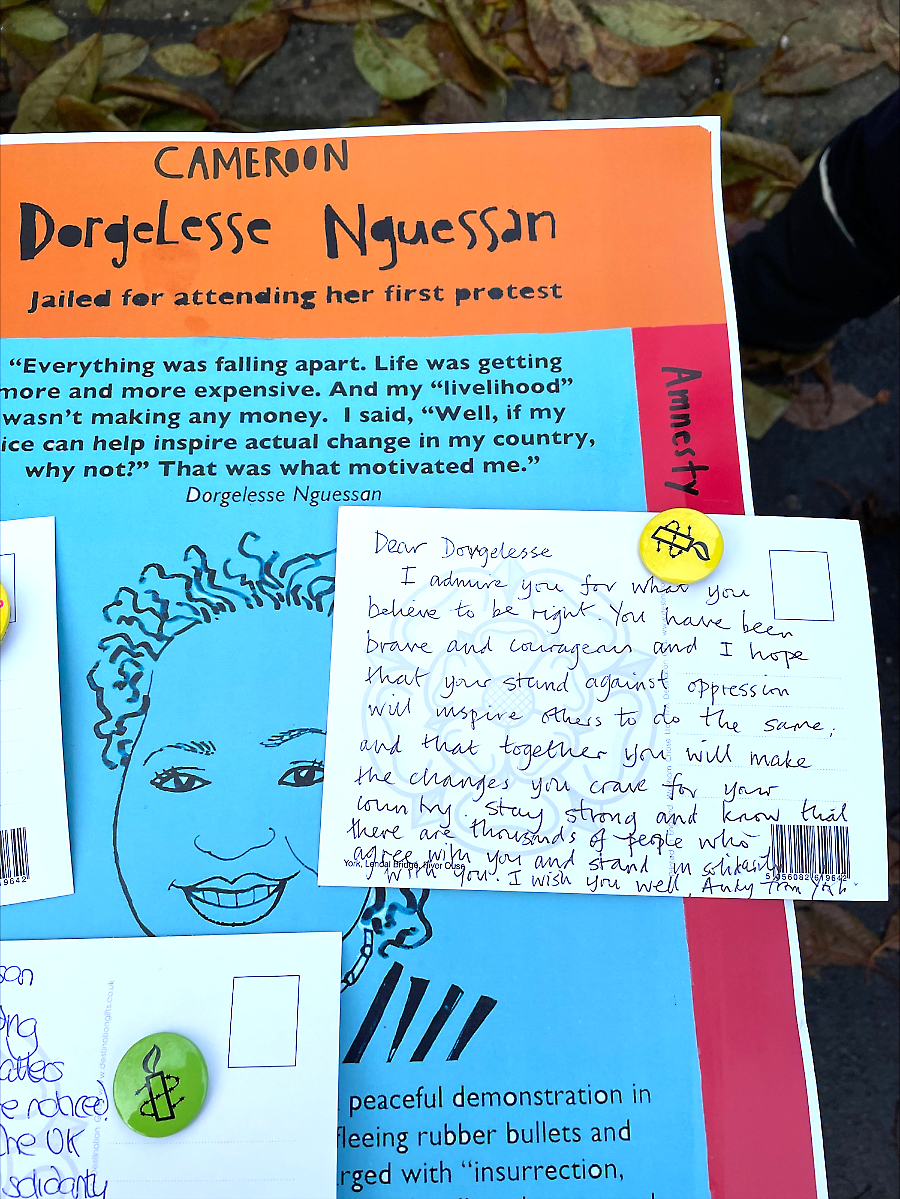 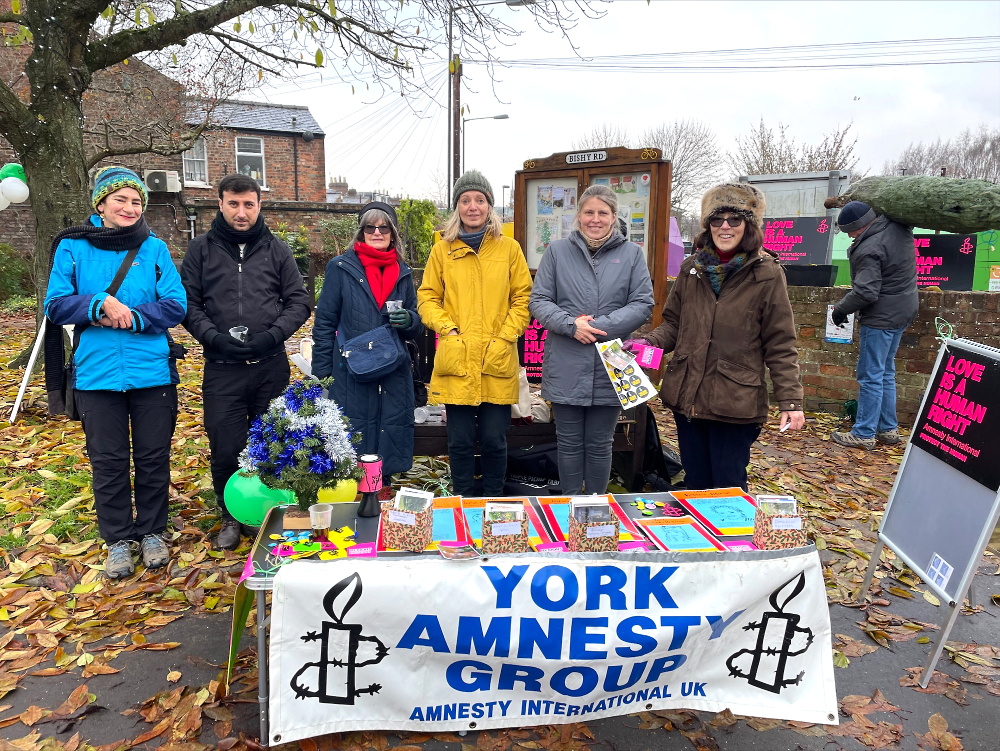 Osman Kavala is one of Amnesty York's prisoners of conscience... 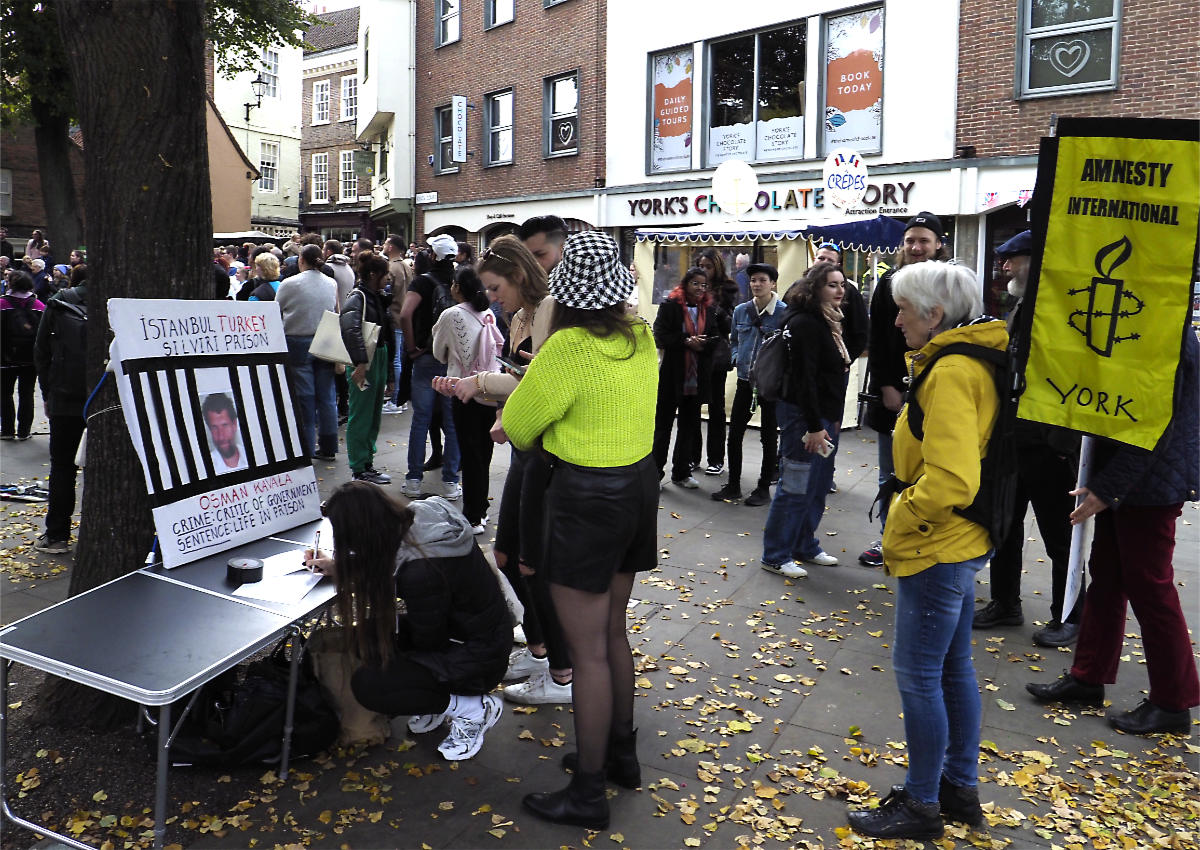 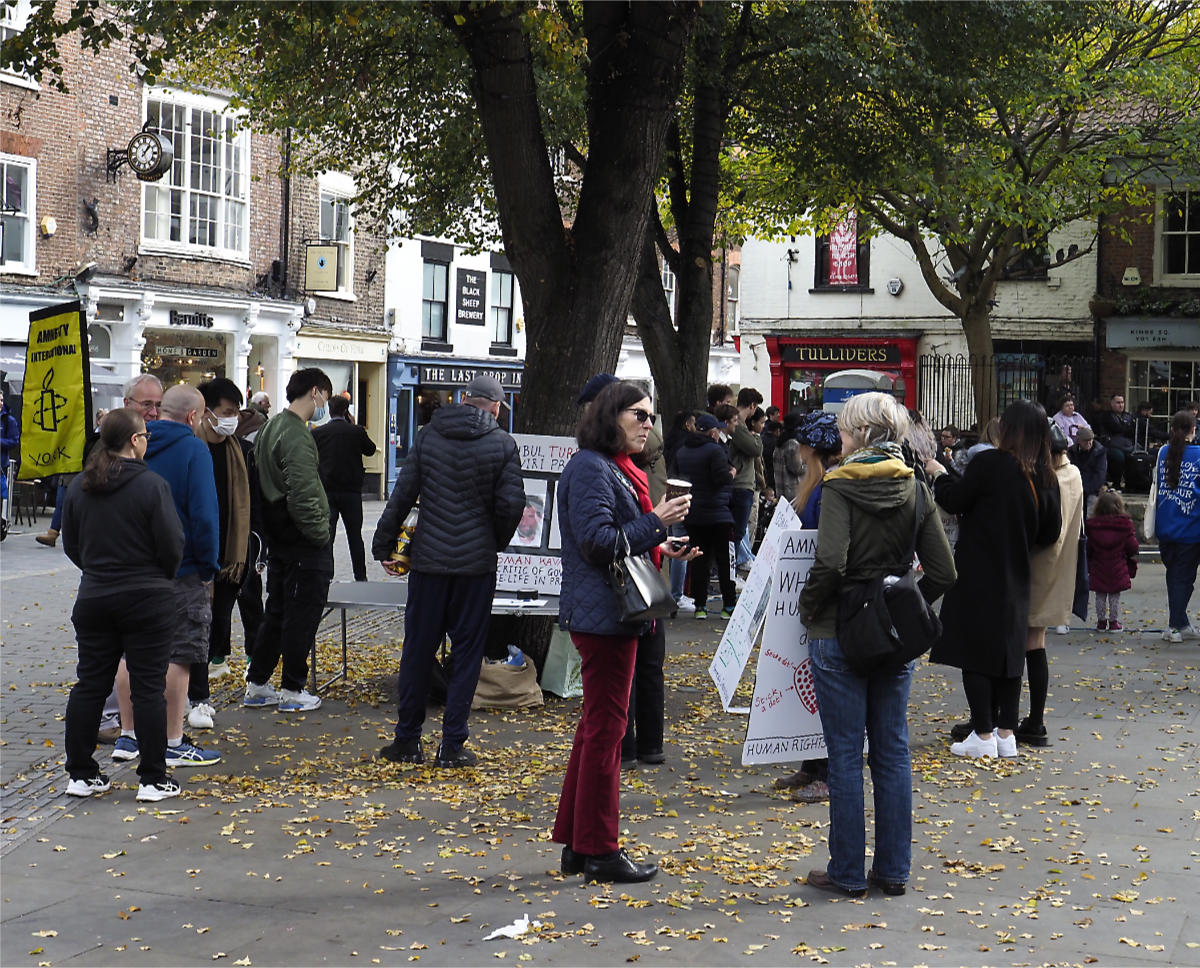 Before his incarceration, Osman Kavala’s main interest was setting up cultural centres around Turkey to promote artistic expression and access to art for all. In 2019, he received the European Archeological Heritage Prize for his work on protecting cultural heritage in danger in Turkey.

Residents and visitors in Kings Square in York filled two birthday cards with messages of support for Osman Kavala, in Turkey, for his 65th birthday in October. He is sentenced to life in prison on trumped up charges due to his opposition to the Turkish Before his incarceration, Osman Kavala’s main interest was setting up cultural centres around Turkey to promote artistic expression and access to art for all. In 2019, he received the European Archeological Heritage Prize for his work on protecting cultural heritage in danger in Turkey. 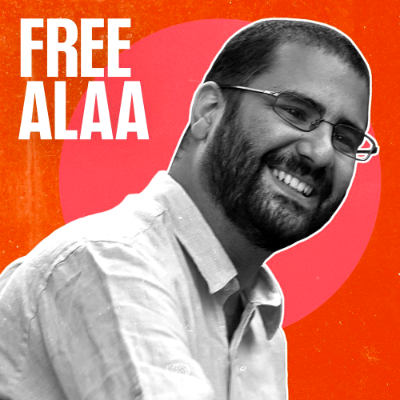 July 2022: Alaa Abdelfattah is still in custody, and needs our help. 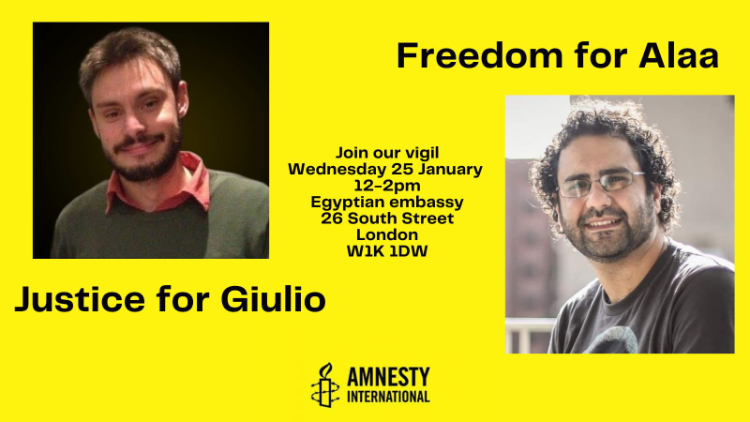 You can write your own letter/email or use/adapt the template at https://freealaa.net/take-action (You can go into the template to get the information without actually sending it.)

25th January is a symbolic day in Egypt's calendar.

On that day in 2011, the Egyptian revolution or Arab Spring began. Alaa Abdelfattah is an icon of that revolution. Because of his outspoken support for political change, he has been in prison for most of the past decade. You have probably heard of him as his name became prominent during COP27 in Egypt. He has both Egyptian and British nationality. Despite the wealth of public support for him, Alaa remains in prison in Egypt. We are demanding freedom for Alaa.

It was on 25th January in 2016 that Giulio Regeni, an Italian student studying at Cambridge University, disappeared from the streets of Cairo whilst undertaking research. His mutilated body was found nine days later. There is strong evidence that he was tortured and murdered by the Egyptian security services. But after all these years, no one has been brought to account for Giulio's murder. We are still demanding justice for Giulio.

and Freedom for Alaa Abdelfattah

The situation of these two men is emblematic of many thousands suffering from Egypt's systematic human rights abuses. You will have the opportunity to sign a letter to hand in to the Egyptian embassy with this message.

I do hope you will be able to join us. Please let me know if you are able to attend.


Amnesty International Bookshop in York has relocated to 19 Micklegate York YO1 6JH.

The team from York Unlocked visited the shop earlier this month and made this video: beautiful building, welcoming bookshop.

PLEASE, NO MORE DROWNINGS IN THE MEDITERRANEAN 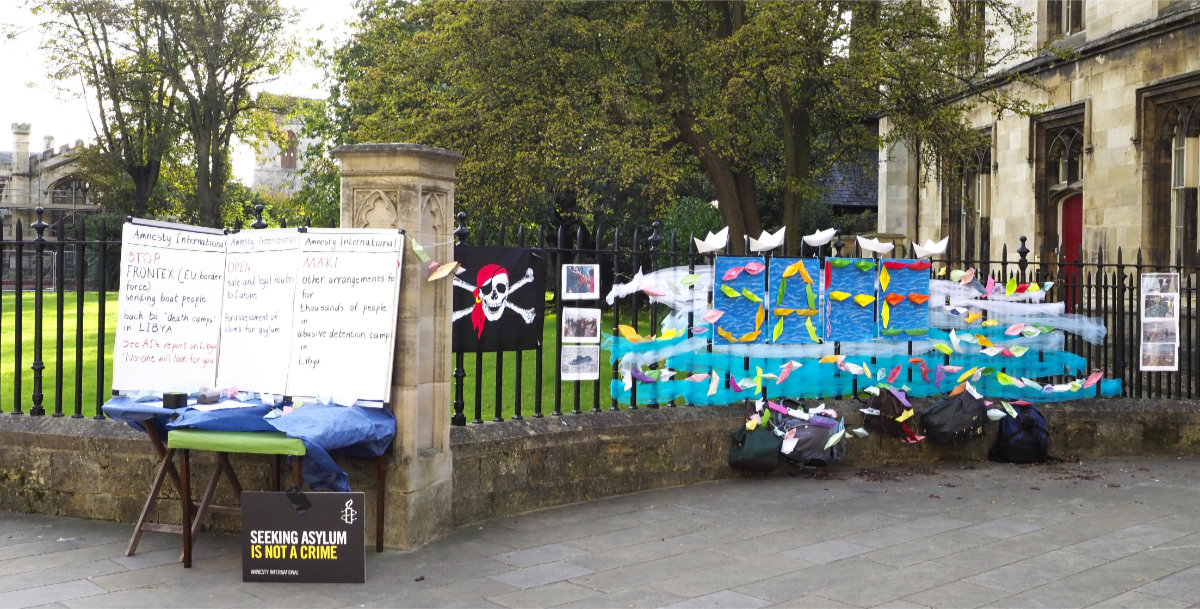 Amnesty York’s installation of the sea with a flotilla of origami boats (folded by Amnesty York, York for Europe and RAY) was displayed in the Minster’s South Piazza by the Roman column on Saturday October 23rd. This was in recognition of the thousands of people who try to cross the Mediterranean each year.

The display was the focus of many passers-by throughout the day. It was also an opportunity to make new Amnesty friends and meet up with established York group members. The Revd Canon Michael Smith joined us to express his support and undertook to remember those who perish in this way at evensong at the Minster.

Of those fleeing their homelands, some seek asylum, some flee poverty. This year, more than 700 (and counting) have drowned.

The stream of people will not stop until the world works together to solve the problems which send them on their journey. In the meantime, Amnesty International is pressing for:

— the creation of safe and legal routes to Europe for asylum-seekers (to put an end to people smuggling) along with a fair asylum assessment procedure.

- the end of the practice by FRONTEX, the EU border force, in cooperation with the Libyan coastguard of forcing people back to holding camps in Libya where they are forgotten, ill-treated and die.

- the end of prosecutions of people and organisations such as Médecins sans Frontières and Save The Children International for saving lives at sea (as is current, for example, in Italy).

Get involved in York Amnesty
in York, UK

Our Amnesty York group meets monthly to plan campaigns, lobbying and fundraising events. We are always looking to welcome new members to the group. No prior knowledge required - just an interest in protecting human rights!

Join us on the second Tuesday of each month at 7.30pm. Meetings are currently taking place via Zoom or at the Friends Meeting House, York.  more details

Our group is made up of like minded people who want to do their bit to protect humanity and human rights around the world.
We organise fundraisers such as: quizzes, ceilidhs and writing competitions.

We do letter writing to support prisoners of conscience. Our group enjoys links with local organisations such as York Pride and Refugee Action Week.

We often welcome specialist speakers to our meetings, who share their first hand experiences as human rights defenders around the world. Our aim is to spread awareness of the important work of Amnesty International and encourage active engagement in standing up for human rights.

Who are Amnesty International?

Amnesty International is the world's largest grassroots human rights organisation. It has more than 10 million members worldwide. Amnesty works to protect people wherever justice, freedom, truth and dignity are denied.

They investigate and expose abuses, educate and mobilise the public, and help transform societies to create a safer, more just world. Visit the Amnesty International Website to find out more. 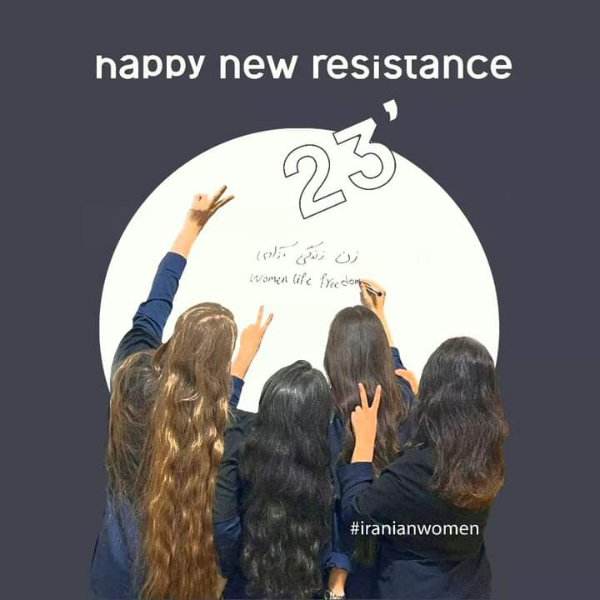 An important message from our friends at the Woman Life Freedom Collective...

You may have heard the recent heart breaking news that a further two Iranian men have been executed by the regime. Please do spread awareness amongst your networks - here are profiles of those executed so far and those awaiting their death sentence. Sunday (8 January) marked the third year anniversary of the shooting down of Ukrainian Passenger Flight PS752 by Iran’s Islamic Revolutionary Guard Corps (IRGC) that caused the death of all 176 people on board - so far no one has been held accountable. There were rallies held in London and globally in support. Please do also read, sign and share this Woman, Life, Freedom Charter that has already gained the support of over 1600 people. It is only a draft and anyone signing can add their own suggestions.

We will be holding another rally in St Helen's Square on the 18 February 2023 from 11 am. Please join us! We will update you on further details and plans for the day, but invite you to share the date amongst your contacts and to share any ideas you have for making it a rally to remember!

We will also be seeking to organise events to mark International Women's Day (8 March 2023) and will again update you on further details.

The collective is a small group of individuals from York who care deeply about human rights and the revolution in Iran. We warmly invite you to join our discussions - we aim to meet every fortnight to discuss how we can show our solidarity with the people of Iran, and we also have a Whatsapp group where we share ideas. Please let me know if you wish to join us in person and / or on Whatsapp. You can also follow us on Instagram.

With best wishes and hope for the victory of the Iranian revolution in 2023, Woman Life Freedom Collective York 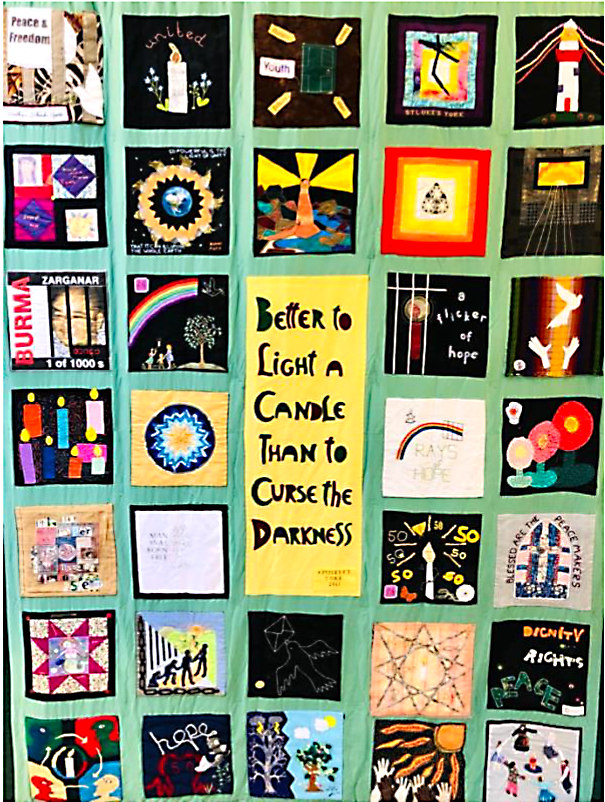 Better to light a candle than to curse the darkness

This beautiful creation was made by thirty local groups and societies in 2011 to mark the 50th anniversary of Amnesty International. The groups were invited to design and make a square based around the Chinese proverb above. The quilt is over nine feet tall and is currently on display in the stairwell at Friargate (the Friends' Meeting House, York, where we hold our meetings) for you to come and see.

SUPPORT THE UKRAINE WITH LOCAL ARTWORK 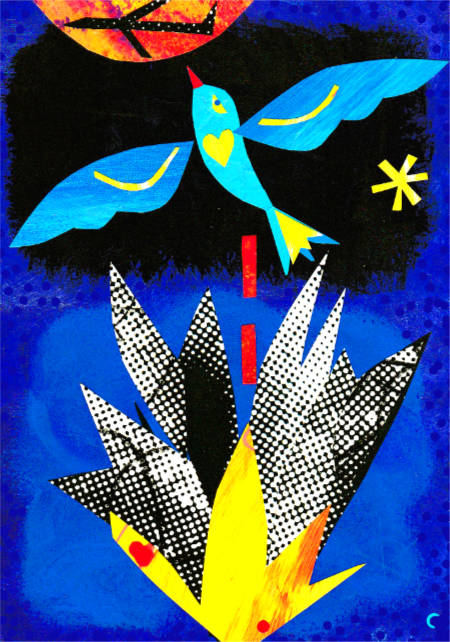 York artist Linda Combi has created beautiful cards to support the work of UNHCR current crisis. They’re A5 folded cards with designs on both sides, and include envelope.

For more information visit Linda's blog or e mail her directly on here.....

York Amnesty member, Barbara Lodge reports:
This week the Russian government closed the The International Memorial Society, founded with the help of Nobel Peace laureate Andrei Sakharov during the last years of the Soviet Union; it remembered, often through prisoners' personal effects, the brutality of the Gulag. In 2003, I was one of the AIUK trainers running campaign workshops with Russian AI supporters in Moscow and Tomsk in Siberia. In Moscow, we used the museum area of the Memorial building - no space on the walls - all work done on easels and the floor! Display cases showed prisoners' belongings - and also "resistance" culture, e.g. here The Beatles. 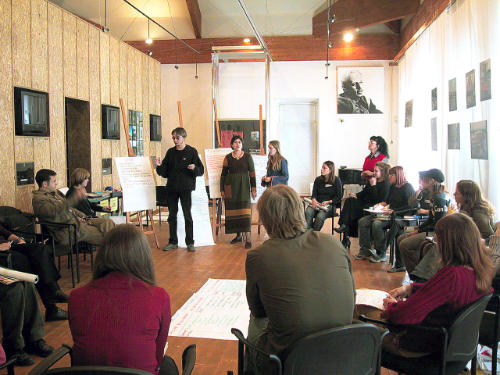 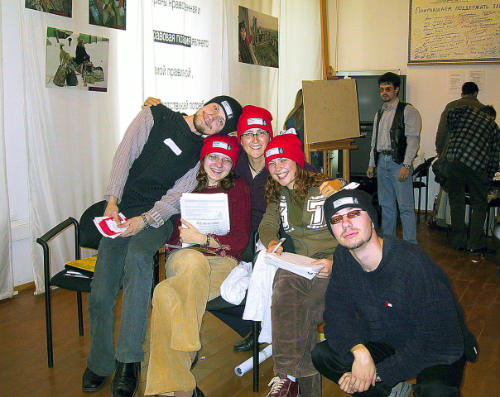 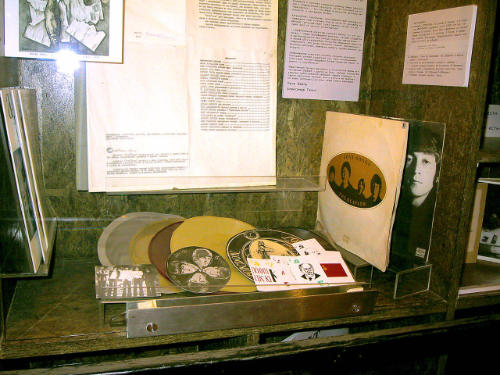 An individual has a right to seek asylum anywhere in the world. In practice it is easier in some places than others....